The aim of the first excavation campaign (1st – 29th of April 2008) was that of investigating the place of discovery of a bronze deposit from the Late Bronze Age, documented in 2002. The place of discovery is situated close to where the Pănăzii stream (marking also the border with the locality of Biia) flows into the Târnava river. The stream is very relevant due to the fact that one of its springs has a high salt content. From Pănade we knew especially Neolithic materials (Criş culture), the Iron Age (“Cimerian” dagger, Latène coin hoard) and Roman ones (rural settlement), while from the neighbouring locality, Biia, come the well known Hallstatt gold finds. In 2006, close to the place of discovery of the bronze deposit, we found, during the first surveys, the ceramic material from the Late Bronze Age, and more recent one, so that we presupposed the existence of a settlement contemporary to the deposit. East of the stream, on the territory of the locality of Biia we could identify also a settlement dating to the middle period of the Bronze Age (Wietenberg culture). On the lower terrace, where, according to the discoverer, the deposit was found, the colleagues from the University of Kiel conducted geomagnetic surveys, which made it possible to record several anomalies. The culture layers reach here the thickness of approximately 1.5 m. One of the anomalies, in the close vicinity of the place of discovery of the bronze deposit, was investigated in a section sized 5 x 5 m.
At the depth of 0.4 - 0.6 m we uncovered the remains of a post-Roman settlement (the 3rd – 4th centuries AD), with surface level buildings (burnt platforms of clay with prints of twigs and boards). The find is unusual, as in this area, sunken-floored buildings prevail for that period. Under this late settlement to which most anomalies registered geomagnetically must belong, there is a bulky habitation layer of 1.3 m, containing burnt clay pigments, a few sherds from the Late Bronze Age and unusually few animal bones (dating to the Bronze D/ Reinecke period). 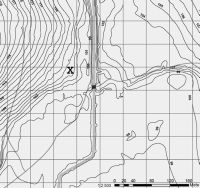 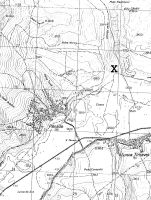