During the 2008 campaign we continued the investigations in squares 5-6 and 7-8 by removing level V, where there was an area of settled clay perforated by numerous pits dug from the upper levels. We noticed that this level was directly on the sterile soil. The oldest occupation level in this area (level VI) is represented by pits dug directly into the sterile soil.
In conclusion, levels I-IV can undoubtedly be attributed to the 3rd phase of the Babadag culture (the 8th century – beginning of the 7th century B.C.), while levels V-VI could be dated to the 2nd phase of the same culture (due to the presence of numerous pottery fragments with stamped decoration). 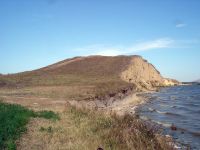