During the 2010 campaign we continued the investigations in squares 5 - 6 to verify the stratigraphy of the entire Hallstattian site by removing level 5 down to the sterile soil, a layer of settled clay perforated by numerous pits dug from the upper levels. We noticed that this level was directly superimposed on the sterile soil. The oldest habitation level in this area (level 6) is represented by pits dug directly into the sterile soil (pit nos. 41-50). We found a lot of impressed pottery in all the levels of the fortified settlement which contradicts the previous definition of three phases of the Babadag Culture based entirely on pottery decoration technique. The oldest phase seems to date to the 10th century B.C: (phase II according to Sebastian Morintz), and impressed pottery is less present in the upper levels (previous phase III). 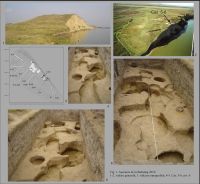