The 2014 campaign led to the opening of a new research sector, aiming to collect new data on the city walls of the city (in
this case the Early Roman fortification). On the other hand we expect discoveries that will allow us to define the main aspects of
the urbanism of the early Roman city – the major circulation axes of the city in the area connected to the Early Roman Gate I and the plan of this quarter. The excavation of Section 1 shows modern interventions and many pits that are affecting the stratigraphy. The building discovered (C1) has the same orientation as the
fortification and in its exterior an access to the wall was discovered.
In a second phase a stone wall was endorsed to this building. 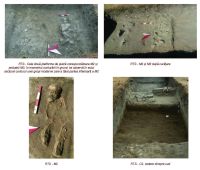 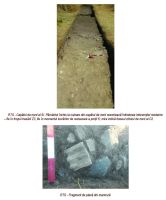